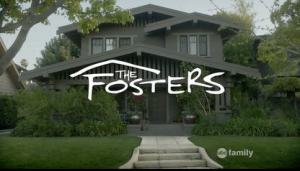 Occasionally it’s fun to binge watch a TV show on Netflix.  What’s playing on my screen lately?  The Fosters.

My synopsis: The Fosters is about a family that is not your typical one.  Stef and Lena are the parents of 5 children four of which are adopted.  Brandon is Stef’s biological child and the oldest.  Marianna and Jesus are twins that they adopted.  Callie and Jude are the newest members of the family.  Each member of the family has their own struggles and challenges, but they end up facing most of them as a family.

I hadn’t started watching this show before because I wasn’t quite sure what it was about.  Was it another teen melodrama?  After watching 29 episodes I won’t say it isn’t at times, but that’s certainly not all it is.  It plays at a higher level with themes about love, family, and being a better person.

At one point I remember thinking that this show had a dark streak running through it.  There were some plot elements that took it from being a run of the mill evening drama to another level.  It takes a look at issues that other shows haven’t really touched, and it does so sometimes with humor and other times by pulling at your heart.

The characters are all very well developed, and by the end of a few episodes you almost feel like you’re a part of the family.  None of them are stale.  Every few episodes we see yet another side of them that makes them not exactly who we thought they were and certainly not perfect.  At the same time, they evolve but stay true to some core components of themselves and they remain believable characters.

I saw that Peter Paige is one of the creators/writers of the show.  I’ve followed his work from time to time since Queer as Folk.  I’m happy for him for what he’s done with his career.  I’m glad that he has continued to push forward positive representations of LGBT culture.  In the case of The Fosters he and his co-creator do it with finesse.

The parents in this family drama are lesbians, but that’s not the point of the show.  It’s there and it’s unapologetic, but there is so much more to it than a show about gay parents.  It’s not preachy, but we learn something or are made to think about something.  Its honest but not over the top.

The entire first season is on Netflix, and part of the second season as well.  The Fosters also airs on ABC Family in its second season.