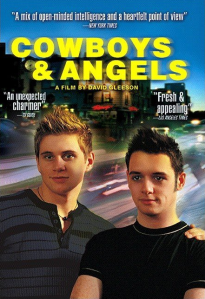 First it should be noted that there are several films/songs with this title.  The one I watched is from 2003.  There is another movie of the same title from 2000.

How many LGBT films have we seen where a gay kid gets caught up in a world of drugs and sex?  This movie is different as it’s the straight one that goes off the deep end. But the best part of the story is about self-discovery and friendship.

The summary: The story concerns a hapless civil servant who gets more than he bargained for when he moves into an apartment with a gay fashion student and finds himself on the catwalk. The film sets out to explore the difficulties for young people in keeping their identities in a fast moving culture of drugs and clubs.

Shane is the civil servant who is stuck in his dead end job in his twenties.  He moves to the city to be closer to work, and perhaps to explore himself.  He finds himself living with Vincent, an out fashion school student who has big dreams.  Through circumstances, they end up sharing a flat.  Each is going through their own journey, and eventually their self-discovery sets them up as friends.

Although early in the movie we see Vincent having a random encounter with an older man at a bar, it doesn’t seem that it is an every-night thing for him.  Shane, on the other hand, starts to get involved with drugs and crime.  It’s strange because Shane seems smarter than that, but he also is longing to fit in – to be a part of something.  He comments at one point to Vincent that being gay at least makes him a part of something.

Without giving too much away, the two opposite guys become rather close, and it’s nice to see a gay and straight friendship depicted on screen.  We often see a gay guy and straight woman developing relationships.  The friendship they have is a special one that would probably last a lifetime.

As I’ve mentioned one of the themes here is self-discovery.  Shane is learning how he fits in – what his voice is.  He finds through circumstances that his civil service job may not be what he wants out of life and that he has other talents that he doesn’t want to waste.  The end of the movie monologue pretty much spells out where he has come on his journey.   Vincent has already gone through much of his coming of age process, but the friendship with Shane gives him a new dimension and perhaps a softer perspective than his cut-throat drama school environment provides him.

The theme of friendship is also obvious.  We see a contrast between those who pretend to be our friends and those who genuinely care about us.  Shane meets people who create an environment where he feels he fits in, but it’s not right for him and is completely unhealthy on every level.

The acting is very good with a good script.  Some reviewers dislike the drugs/crime aspect, but I think it adds contrast to what could have been a run of the mill self-discovery.  Production values are good, although seeing a movie on film and in standard definition looks odd to me now.  The good looks of the lead actors make up for it though.

This ends up being a feel-good movie that leaves you with a sense of hope and warm friendship.  It might have a few off twists and turns along the way, but then again so does many a self-discovering journey.