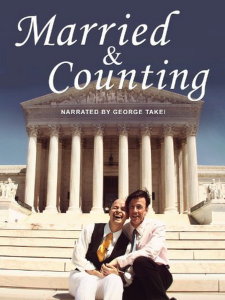 Getting married once is enough for most couples, but when all things are not equal a few more weddings might help.  Pat and Stephen are trying to have their relationship on equal ground as straight relationships, and they’ll go to great lengths to do so.

The official scoop: A same-sex couple celebrates their 25th anniversary by traveling across the country to get married in every state that will let them.

This documentary spans a few years in the making, and starts when just a few states allowed gay marriage.  It can be a little confusing because of how fast the laws have changed in each state, but they break it down pretty well.  Pat and Stephen travel to each state where gay marriage was allowed at the time and even a few that don’t allow it.

The idea is that they want to have the maximum protection for their relationship as allowed by the law.  To do this they are marrying everywhere it is legal.  I’m not sure this is of any help in a legal sense.  A state that allows gay marriage would likely recognize a same-sex marriage performed in another state.  However, if you live in a state that doesn’t allow it, being married in multiple places makes it as official as possible.

This is really about making a statement.  I can say from personal experience that it is dismaying that one can be married in one state and then return home to not be married.  The federal recognition that has changed makes that a little easier to bear, but having one’s home state tell you that your marriage is invalid and unrecognized is disheartening to say the least.  I can understand why Pat and Stephen are making this statement, and I hope that it helps open people’s hearts and minds to what it means to not have a recognized relationship.

I applaud the couple for making this film.  It takes a lot to put yourself and your relationship out there in this way in order to make a point.  They really lay out some personal stuff (like family issues) so that you can understand where they are coming from.  Everything is handled very well and in a mature way and in no way resembles a dramatic reality show.  Each wedding is well done, and although I thought it might, the weddings don’t get old or stale.  Each one is different and has a different meaning.

I found the film to be well done and produced for one that relies as much as it does on hand held shots and some second shooter video.  It told the story well and lended the personal and gritty side to the story.  It is an important story to be told.  Even as the laws are changing on an almost daily basis, all is not yet equal, and I appreciate this couple’s contribution to the community’s history and struggle.