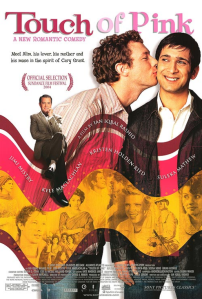 A coming of age story told with some twists and turns.  It’s a funny and moving story about coming to terms with yourself, growing up, and living the life you have in front of you.

The synopsis: “Touch of Pink” is a comic clash of cultures, values, and sexuality. Alim seems to have it all: a great career, a handsome boyfriend, and a personal guide in the spirit of Cary Grant. And living thousands of miles from his mother Nuru and his family in Toronto, he can keep his lifestyle hidden. But when Alim’s conservative mom pays an impromptu visit, with the intention of dragging her son to a big fat monsoon wedding and getting him matched up with a “nice girl,” the spirit of Cary Grant suddenly becomes indispensable.

I watched this movie years ago I remember liking it enough that I rented it to see it again.  The story has some great characters, good development, and comedic value.  I’m not sure that the description is entirely accurate at the end – Cary isn’t so much indispensable himself, but Alim learning to listen to himself is.  He wants to be open and honest and has to figure out how to do that.

The character of Cary Grant who is basically Alim’s imaginary friend does have some great lines.  One where they are in Alim’s mother’s house and Alim says, “Can you believe she still keeps the plastic on the furniture?” and Cary replies, “It keeps the evil fresh.”  Another scene where Alim is trying to tell his mother that he is gay but she doesn’t seem to get it at first, Cary says, “Not enough wind through the windmills of her mind.”  There are plenty of moments like that throughout the film to keep it light and fun despite the serious journey that Alim is on.

One of the main metaphors in this film is Cary himself because he is a childhood imaginary friend of Alim.  He was dreamed up in Alim’s parents’ absence and has been a constant companion.  He keeps Alim on track, reassures him when he’s down, and is his confidant.  But he’s a holdover from childhood – a childhood that Alim needs to grow up from.  It seems Alim is held back by whatever happened when his mother went away to London, by the early death and then absence of his father, and by having not come out to his family.  But he’s moving towards a life that is forward looking and honest.

But in contrast, the wedding he is going to for his cousin who is closeted in a bad way.  And the fact that the closeted cousin’s mother knows but still wants him to pretend is a stark difference to what Alim (and eventually his mother) want.  They both grow into knowing that they would rather be truthful and honest in their lives than pretend that it’s something else.  Alim’s mother says to her sister at the sham wedding, “But the ice sculptures will melt, the flowers will brown, and then what are you left with?”  This rather sums up the theme of the movie, to be who you are, be truthful and comfortable with it, and have fun.

I really like this movie.  It’s one of those films that when its over you wish it would continue.  It ends in a good place and leaves you feeling like all is well.  And what’s better?

Another good line: “This is not tense.  I’m just terribly, terribly alert.”