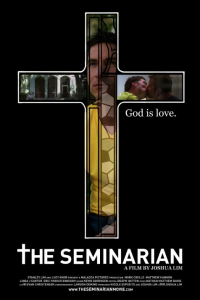 I had expected a movie wrought with angst over reconciliation of one’s homosexuality with religion; however, this movie is much more than just that.  It’s about how love and suffering coexist, and then how that coexists in one’s relationship with God.

The synopsis: A closeted gay seminarian’s struggle in a troubled relationship leads him to question everything he had known about God and love.

That synopsis doesn’t really cover the depth of this film.  Ryan is on a journey, and in this film we see one piece of it.  He starts out with a certain innocence in that he is looking for that certain relationship with a man, but hasn’t yet learned how to be on his own.  He says early on that he doesn’t feel loved unless he is in a relationship, and I think that alerted me that he was in for some development.  He does learn early on what he doesn’t want, but then goes on finding out that everything is not as it seems.

His relationship with Bradley seems ok at first, but shortly shows signs of problems.  I thought of something my roommate and I used to talk about when we got into a relationship with someone who really wasn’t in the right place for one – lost puppy syndrome.  Bradley needs Ryan at first, but not for the reasons that Ryan would like him to.

There is some nudity in this film – even in the first few minutes.  It’s not terribly graphic, but at first I thought, “what a ploy to catch the viewers’ attention.”  The more I think about it (as well as a later scene where Ryan is nude), the more I think it contains metaphor.  Ryan is about to learn something about life and himself, and he starts in this innocent, completely vulnerable state.  In both instances there is much suffering afterwards (not due to the nudity itself though).

The almost commentary thesis that Ryan is writing obviously mirrors the experiences in his own life.  He questions why there is suffering in relationships and why God made that a part of love.  The thesis evolves through the movie as Ryan does, with some parts of it seeming almost like therapy.  For instance after some particularly rocky troubles with Bradley he starts to discuss forgiveness and how that works in a relationship.  Themes here are rather obvious: love, suffering, forgiveness, and being true to one’s self and needs.

Production values were all good, and the main actor (Matt Cirillo) did a very good job.  Matt actually carried the movie as he was pretty much the focus of the whole movie – it was Ryan’s journey and he is appropriately present.  I thought that although many of the scenes seemed slow or when there was a long hold on a person or object, they were done deliberately.  It gave you a feeling at that point that was relevant to the character.

I was pleasantly surprised at how well done the film is, and there was a good balance between real life and theology so that the movie wasn’t just about religion.  It was a part of who Ryan is just as being gay is – but neither one is the whole picture in and of itself.  It’s about the human journey learning about relationships the hard way, and how we learn to deal with both the joy and the pain.