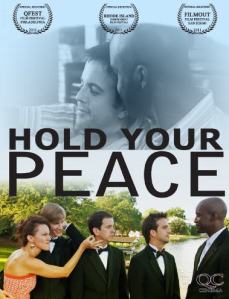 Aiden finds going to his ex-boyfriend’s wedding a complicated task.  While some of us might find that awkward, in this case it’s a dramatic tale.

The scoop from Pointed Films, Inc: “Hold Your Peace is the story of Aiden, a man asked to be the best man at his ex-boyfriend’s commitment ceremony. Rather than risk going alone, he finds the most unlikely of dates in his roommate’s more ‘stereotypical’ friend, Lance. As time goes on, he discovers that things are far more complex than he thought he could handle. A gay romantic comedy with a lot of heart, it explores how we all decide who we’re going to spend our lives with, and what happens when we try to deny what’s really in our hearts.”

I’ll start with this so you know where I’m coming from – I found it difficult to like any of the characters in this film.  Aiden is unhappy and full of spite.  Lance is pretty full of himself.  Max seems oblivious.  For most of the film I did like Forest – until the end.  I liked Janice and her funnies until she became a bit too meddling.

But let’s look at what I culled from it..  There is a line that Aiden says that speaks to him being uncomfortable with being out of his comfort zone.  “I’m always leery of directions that say turn off the paved road.”  In his case, the entire thing is a journey off the beaten path.  In order for him to be truly happy, he needs to do something out of the norm.  (He also needs to communicate like an adult).  So what you might take from this is that sometimes you need to step out of your comfort zone to create the life you want, and to make sure those you care about know that you do.

There were some funny lines in the film, but unfortunately they were often tied to cliches and stereotypes.  The joke about lesbians moving in after the first date is old.  The cliched serial bad dates has been done before.  The guy who fakes a date is pretty tired.

I wanted to like the film, but I just couldn’t get into it.  I might be biased.  There was a lot of manufactured drama in this movie.  So many of the characters simply made their bed and then had to lie in it.  I’m not a fan of that in real life, and in movies it just irritates me.  Aiden can’t get a date to the wedding, and since he is apparently has no friends he has to take a friend of a friend that isn’t really likeable.  C’mon, just go by yourself.

It seems unfair that I’m complaining about the very premise of the movie.  It just felt like it was not carried to a place where a message or theme came to fruition.  The synopsis says this is a film about deciding who to spend our lives with and how denying that looks.  But in reality, it comes across as what if you are terribly immature and can’t communicate with others?  Several of these characters need counseling and to be on their own while they figure themselves out.

The end result could have been more about HOW these people figure themselves out, and how that shapes their decisions about who they should be with.  But who knows what happened in Aiden’s head that caused him to behave as he did besides Janice told him to?  Why is it that Max is unhappy?  And when the heck did Janice become a lesbian?

The comedy in this film does help here and there.  Janice is lying to Max about Aiden’s boyfriend and has to come up with a name.  “His name is…  [sees a brick] Brick!”  Later she comments about gay men and their drama – “Gay men have the most dramatic closure, don’t they?”  Indeed.

Towards the end of the movie, Janice has a better idea than ones she’s had in the past.  “Why don’t we rent a romantic movie, get some ice cream, and do our very best sorority sister impressions?”  I might follow her lead on this one…