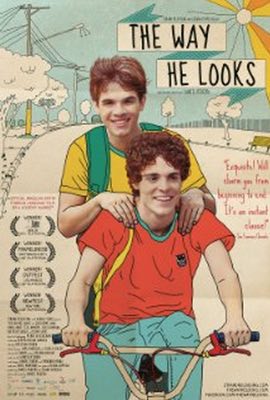 A unique coming of age film that sifts through friendship, crushes, and jealousy to find hope and a new beginning when it seems like the only solution is to go somewhere no one knows you.

Synopsis from IMDB: Leonardo is a blind teenager searching for independence. His everyday life, the relationship with his best friend, Giovana, and the way he sees the world change completely with the arrival of Gabriel.

I’ll start by saying that I really like the short film version of this movie.  I searched for months to find somewhere within a few hundred miles to check out the feature length version.  I was pretty excited when I saw this was playing at Bloomington.

I’ve written before about gay-themed film cliches, and this film contains a number of them as they relate to gay teens in high school.  However, I didn’t find them as disturbing as I normally would, and I think that’s due to the overall tone of the film.

The movie seems rather laid back.  The slower pace and calm demeanor of the main characters create an environment that is well-paced and thoughtful.  But this doesn’t mean that there’s not any drama.

Gabriel still has to deal with bullying from his classmates which ranges from name calling to some nasty pranks.  He’s trying to figure out if his friend Gabriel has feelings for him or for someone else at the school.  And his best friend Giovanna is feeling a bit jealous of the new friendship between Leo and Gabriel.

One of the unique elements of the film is that Leo is blind.  The film doesn’t solely focus on this any more than it zeroes in on Leo being gay.  But it brings the two together into an interesting combination as we look at Leo’s coming of age.  Imagine trying to figure out what is going around you and perhaps even who is gay too when you aren’t able to see people’s body language, eyes, etc.

There is a scene where Leo and Gabriel are showering after the pool, and if Leo could have seen Gabriel he would have known about Gabriel’s feelings.  Often, Giovanna narrates what she sees around her at the school so that Leo knows what is happening.

Gabriel is a source of growth for Leo in many ways though.  He doesn’t just narrate what’s around them, but he challenges Leo to teach and learn.  Leo teaches Gabriel about his life while Gabriel returns the favor showing Leo how to dance (“Feel free to move your feet”) and taking him to the movies.  Although some of these things seem like they are a silly thing to do with a blind guy (like going to see an eclipse), it demonstrates that Gabriel doesn’t limit Leo because he is blind.

This is in contrast to Leo’s parents who guard him like a porcelain doll.  His mother is especially restrictive which causes Leo quite a bit of grief.  Even Giovanna is a part of this in some manner as she is used to Leo’s restrictions and to helping him where she can.

There are several themes that come out of this film: first love, crushes, jealousy, friendship.  The friendship that develops between Leo and Gabriel is sweet, and the relationship between Leo and Giovanna speaks to family as much as anything.

The film doesn’t feel groundbreaking at this point in queer cinema, but it’s unique enough that it doesn’t feel like something you’ve seen before.  I’ve seen it referred to as a “charming” movie, and indeed it is.  But it also leaves you with a feeling of hope that new beginnings bring.

Favorite lines:
“What is your laziness level?”
“Feel free to movie your feet.”