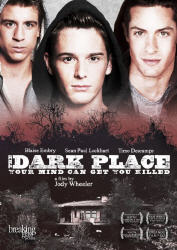 It sucks when people betray you…  The Dark Place is a vineyard, but it’s also where Keegan must find out who is a threat to him and his family amongst a complex group of people.

My synopsis: Keegan goes home after some time away, but he returns to find some things have changed.  His mom has remarried and now has a step-son.  Keegan also brings with him his super ability to remember things like pictures in his mind.  His boyfriend Wil comes along for quite the ride.  Keegan knows something is amiss, and works to figure out what is going on before something terrible happens.  Along the way a lot of crazy stuff happens, and people may not be who they seem.

Keegan (played by Blaise Embry) is quite a complex character.  He has this ability that can be helpful but sometimes burdens him.  He can come off as a real smartass, but he cares about people.  He wants to be in a relationship, but pushes people away.  He can be a mass of contradictions, but he’s a smart guy.

His boyfriend Wil (Timo Descamps) is almost a polar opposite, perhaps making them a good pair.  Wil also seems to have an ability although not as apparent as Keegan’s.  But what is more noticeable is his good-heartedness.  He seems to want nothing more than to connect with Keegan, to know more about him, and to help him however he can.

Other notable characters include Celeste, Keegan’s mother.  She is well played by actor Shannon Day who gives the character depth and heart.  Sean Paul Lockhart plays the step-brother, Jake, who immediately appears slimy.

The film starts off with some events that, like in many murder/mystery films, seem random or out of place.  And even as we get into the story, some things just don’t seem to fit.  When Keegan attacks Jake suddenly, I wondered where the heck that came from.  But later things start to go together like puzzle pieces and there are a few of those good “ohhh. I see!” moments.

The notes that I took while watching the film end rather abruptly towards the end mainly because so much was happening that I had to focus on the screen.  Truly things come together quickly and in crazy fashion.  Even parts of it were funny which I found interesting and amusing.  Some parts were a little awkward like the one villain who seemed to have some daddy issues with his sexuality.  And I wondered occasionally why all these kids had gone to a psychiatric ward.

Overall, the film did what a mystery/suspense film is supposed to do.  It kept me wondering what was about to happen and who did what.  It took a lot of complexity and boiled it down at the end.  Main characters were well developed, and even Keegan became more likable.  I enjoyed that it was a gay-themed movie, but that wasn’t the focus of the film.  I thought the production values were good, and the acting/directing carried the story where it needed to go.

I also liked that this was a film that went a different direction from most other gay themed ones, and is worth watching especially if you like mysteries.  It has a much different tone than the Donald Strachey films.  Worth renting from Amazon or iTunes.