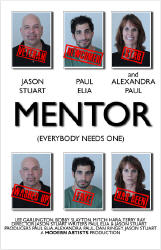 I recently found a web series that I hadn’t seen since the preview awhile ago.  It’s called Mentor, and it’s written and directed by Jason Stuart (and Paul Elia).  Who doesn’t love Jason Stuart?  I started watching one episode, and before I knew it I had watched all 6.  That’s generally a good sign…

The official quick synopsis: Mentor is about pursuing your dreams, supporting your friends, and trying not to over-eat or have sex with people you don’t know when things get too hard.

Jason plays a comic who is lamenting his older years and Paul plays an up and coming comic who wants Jason to be his Mentor.  The two become good friends and we follow them through some of their fun and rough moments.

The show isn’t overly complicated and focuses on the two main characters’ lives and how they relate to each other.  I found it to be well done and with good production values.  The funny lines were funny, and there are moments that make you think and feel something.

It’s worth checking out, and I hope they end up making a second mini-series.