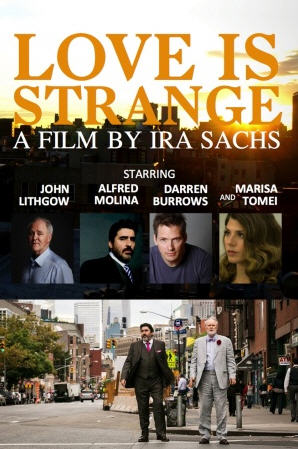 Love may be strange, but this enduring relationship is not.  This film looks at love in whatever form that can stand the test of time.

The official synopsis : After 39 years together, Ben and George finally tie the knot in an idyllic wedding ceremony in lower Manhattan. But when news of their marriage reaches the Catholic school where George works, he is fired from his longtime job and the couple can no longer afford their New York City apartment. As a temporary solution, George moves in with the two gay cops next door, while Ben moves to Brooklyn to live with his nephew Eliot, Eliot’s wife, Kate, and their teenage son. As Ben and George struggle to secure a new apartment, the pain of living apart and their presence in two foreign households test the resilience and relationships of all involved.

One of the main themes that is obvious and evident is that of an enduring relationship and love that lasts.  Ben and George have been through a lot in their 39 years together, and this new test is not easy.   They have difficulty being apart as we can tell when they get back together.   A good line is, “I miss your body next to mine when I sleep.  I will not let bad engineering get in the way of that.” (referring to a rickety set of bunk beds)  You can tell that their relationship is solid by what others around them say (that they are role models) and how they interact with each other.  They just fit together, and they know each other like the back of their hands.

The film is a bit slow, and in certain parts I understand.  There are a few scenes at the end of the movie that are drawn out, but for good reason.  There are some, however, in the middle that go on and I’m not quite sure why.  Some of the scenes involve their families, especially Ben’s family, and how difficult they find it to have him there for the extended amount of time.  They have their own issues that they’re dealing with, and Ben’s presence only complicates things.

One line from the film that gets a lot of play is when Ben says, “When you live with people, you know them better than you care to.”  Ben gets to see more of his nephew’s family than he did before, and gets to know more of their specific issues and problems.  He finds there are issues in their marriage, issues with their son, issues with how they each relate to their son…  Perhaps this is why we see so much of the family’s issues.

But you certainly start to feel how both Ben and George feel being in their situation, and it makes your heart hurt.  Of course I have to wonder if their wasn’t perhaps another solution to their problem, but then that’s not really the point.  The issue is how they get along separately, yet together at the same time.  Really, they’re not ever far apart.

I don’t want to spoil anything for anyone who has not yet seen the film, but there are several beautiful scenes and moments.  One is at the very end which I considered to be an enduring gift for the future, much as Ben and George’s relation has been for them.  There is continuity there that goes beyond the movie.  It brings home what is said early in the movie that Ben and George are an example for everyone.

This is one of the few films I’ve seen in the theaters where the audience applauded at the end.  I also thought it was interesting that the crowd was quite diverse which I can only say demonstrates how far we’ve come in the past decade.  I’m glad they were able to enjoy the film as much as it deserved to be.