“Let go and let love” they say.  This is a movie about just that.  Currently the top seller in the TLA top 10 I agree that it’s worth a watch.

The official synopsis: Corey had it all – a successful career, a sister who’s his best friend and most of all, a bright future with his boyfriend. But, when the boyfriend dumps him for a woman, Corey sets off on a wild journey of self-discovery that leads him to new love and a life-changing choices.

Themes in this film surround love, relationships, and mainly letting go.  Letting go in two ways – letting go of the past and letting things develop in your life without a plan.  Corey in some ways represents many of us who want to ensure that our lives go according to plan.  We may not all schedule out our birthdays, but we all want the security of knowing what comes next.  Sometimes though the best things in life come along when we aren’t planning on them. 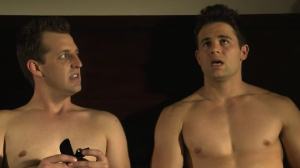 There were a number of scenes that were a little cliche but charming or meaningful nonetheless.   The scene where Corey and Jon break up is interesting for a number of reasons including the worst proposal and the word “flexisexual.”  In the synopsis of the movie it seems like this is main part of the story, but I think it moves on pretty quickly from there.

The final scenes were also a bit predictable, but felt like a good ending anyway.  There’s good chemistry between Corey and Pete.  The beginning of their
relationship is well developed and fun to watch.   The relationship with Pete is a bit nonlinear though due to unnecessary dramatics from Corey.  I know Corey was having a rough day, but I’m not sure why he was quite so hateful.  For someone who is a therapist he’s a little un-adjusted

stagy.  When something influences a relationship from outside its different because then it’s beyond their control.  But I think I just find it annoying otherwise because  I hate seeing this type of thing in real life too.  Life is too short for self manufactured drama.  However, this story gives enough background and character development to make it watchable and even interesting to the story.

The relationship with the sister Kelsey is also a good addition to the film.  She is the polar opposite of Corey so that provides some contrast and fun.  She also comes across as a good person and someone who is genuine.  Her poetry is hysterical and made me laugh.

Overall, despite some of the film’s shortcomings I found it enjoyable to watch and had more to it than just goofy punchlines and drama.