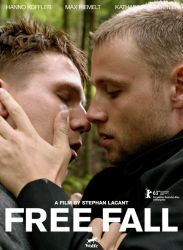 Many have said this is the German Brokeback Mountain, and despite the similarities I would have to disagree.  I think the film is more about self-discovery and learning to guide your own life where you want it to be instead of being in a constant state of free fall.

From Amazon, the synopsis:   Marc’s life goes into a state of free fall when he develops feelings for his male police partner, Kay. Torn between the life he knows so well and the exhilaration of this new adventure, Marc finds his world rapidly spinning out of control.

The scenes where Marc and Kay first seem to develop an attraction to each other seem a little bizarre to me.  For someone so deeply in the closet that he barely knows he’s gay himself, Marc is awfully comfortable with sexual encounters outdoors.  One scene actually was uncomfortable as Kay seemed to force himself on Marc after Marc had repeatedly pushed him away.  After Marc learns to run very quickly and runs away, I would think Kay would steer clear of this one.  But he continues to engage him.

Are there underlying issues with Kay’s self-esteem?  Perhaps.  The fact that he doesn’t appear to be out makes one wonder what exactly his issues are.  But he was awfully self-confident coming on to Marc.  He also comes across as somewhat reckless – maybe a chaotic element causing the free fall?  But what’s with the drugs, sex in bathrooms, and sudden love proclamation that seems to come out of the blue?

Most of the movie seems to be about things happening to Marc.  Rarely does he attempt to alter his course except when he comes back to Kay which seems almost reflexive instead of deliberate.  Not until the last 5 minutes of the movie does he actually find a voice to say what he doesn’t want.  The film is slow-paced, and some scenes seem like they’re lacking in dialogue.  Sometimes I think if the characters just spoke to one another instead of the “open to interpretation looks” they would all be spared some hurt.  I have to admit that I often find this plot/drama development device maddening, so that may cloud my judgement.  It reminds me of a soap opera where they fill time and plot development takes place over years.

I’ve already touched on some of the themes in this movie, but to put it succinctly, it’s about taking control of your life and guiding yourself out of a chaotic situation – a free fall if you will.  Being able to leave the past behind and moving towards something is reflected in the jogging metaphor.  In the beginning the running problems indicate that things are not what they seem.  Marc is a police officer at the academy in in shape, but he has difficulty running and keeping up with his peers.  He goes from someone who has difficulty running and breathing evenly to someone who can (hopefully) move himself in the right direction.

Production values are all very good in this movie and undistracting.

Memorable moments: The horrified, zombie-ish look from Marc’s mother when she makes a discovery.