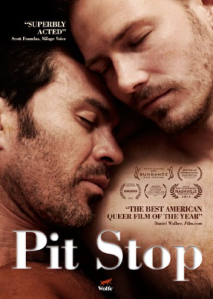 I started watching this movie one night after work, but ended up stopping it about 30 minutes in because it seemed to require more thought than I could muster after work.  I finished watching it the other day and found that with a functioning brain I liked the movie.

From Amazon: In this perfectly crafted American drama, openly gay Ernesto (Marcus DeAnda) and closeted Gabe (Bill Heck) grapple with the sad tribulations of being gay in a small, working-class Texas town. This Sundance smash is a truly uplifting love story about male intimacy, the heartache of unsuccessful relationships and the transformative power of love. … Reminiscent of such classic rural gay love stories as Big Eden and Brokeback Mountain and showcasing equally accomplished performances from its handsome leads Pit Stop achieves an understated tone of authenticity rarely seen on screen as it shows us a tender, beautiful slice of gay American life.

The movie has a slow pace.  This is not a bad thing – it simply embodies the pace of the life it depicts.  From the time I’ve spent in the rural West, there is a different pace of life that this film makes you feel.  The characters aren’t running around like in some New York set rom-com, they’re dealing with issues in their lives and it doesn’t happen quickly.

Dealing with loss seems to be a consistent theme.  Lost lovers, losing lovers, and lovers in limbo are all present in different story lines.  We’ve all been there.  Each though has a unique spin whether it’s about being in the closet, being able to move on, or even dealing with family members that may not be very accepting.

I don’t mean to make the film seem depressing – it is not.  Sometimes doors close behind you so that another may open.  After watching Pit Stop I felt good.  Without giving too much away I’ll just say it won’t leave you in a rut for the day.   There are also themes of finding friendship in different places from a date that goes differently than one expects to pets that find their way into our hearts.  There are so many things in this movie that could be metaphors – like the cat that comes to the door and stays because it is fed there, maybe like a certain boyfriend.

Production values were excellent, music score is spot on, acting is fantastic, and not much draws you away from the story you are being told.

Memorable scenes:  Gabe in the car.  Simple right?  Each time you get a glimpse into his heart whether he’s singing or just a smile and tap on the steering wheel.

It’s not a light-hearted film that you can watch with one eye open, but it examines components of rural life and life in general that make you think and maybe even reflect a little.