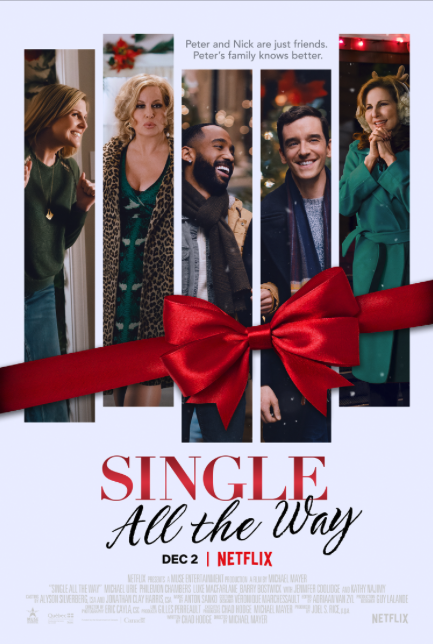 Holiday rom coms have been a tradition for many years – straight ones anyway. In the past few years, we’ve seen a few of those holiday romances get a special rainbow sparkle. Single All the Way added another title to the growing list in 2021, and it followed the existing holiday rom-com formula.

Peter gets his best friend Nick to go home with him for the holidays after his current boyfriend turns out to be married. Peter’s family is apparently obsessed with the fact that he’s single, so he convinces Nick to pretend to be his boyfriend. However, when they arrive, Peter’s mom has set him up on a blind date with James. Now they don’t have to pretend to be together, but everyone around them sees that they should be.

It’s painfully obvious from the very beginning of the film where this is going. I’m not sure foreshadowing is the right term to use here – more like beating a dead horse. When Peter and Nick go to a holiday party together they talk about their friend-versary of 9 years, they bring each other their favorite drinks at the same time, and the line spoken is “you know me so well.”

As I watched the film, I kept noting it was painfully obvious. And if I’m looking for a theme out of this, it would be to realize what you have right in front of you. Everyone around them (including you, the viewer) know that they should be together, and sometimes it’s a little disturbing that Peter doesn’t see that. Even after a scene where he really should get it, he still goes off with James and I’m unsure at what moment he makes the connection.

There’s also the fact that the main characters aren’t where they want to be. Peter wants to be home with his family in New Hampshire instead of in LA, and both have a dream job they would rather be doing. Perhaps this blinds them to exploring their relationship as they are looking for fulfillment in other things.

The cast brings a lot of familiarity to this film. Michael Urie, Kathy Najimy, Luke Macfarlane, and Jennifer Coolidge are among those I recognized immediately from so many other films/series. And I liked that the main leads were played by gay actors. Overall, enjoyable performances.

There’s nothing inherently wrong with the holiday movie formula if that’s what you’re going after. In this one, the trope is the man who brings someone home to his family pretending to be together. In this case there is a slight twist. But the frustrating part was how they eventually got together. I saw how Nick came to his realization, but it was like taking a 2×4 to Peter’s head to get it through.

There were a few notable moments that I really liked. There was a great reference to the movie Clue, and I loved Aunt Sandy’s question about the blind date being from Grindr. I also found the name of the play amusing as well. The scene after the pageant between Peter and Nick was well done and rather touching.

The film was enjoyable to watch, and if you’re looking for something light and fun to watch during the holidays this will fit the bill. I just felt like there could have been more in some way.