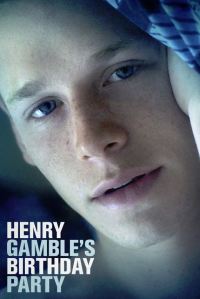 “I’m able to think for myself.”

This film starts in an interesting way.  Henry’s friend Gabe sleeps over, and they end up getting themselves off right next to each other talking about what Gabe would do with one of his female friends.  Right afterwards, it’s like nothing happened with Gabe talking about Henry’s podcast, and how he wishes he would talk about more Christian bands.  Oh, happy irony.

The film takes place entirely around Henry’s 17th birthday party.  Although Henry is learning about himself and how that fits into his family and religion, everyone around him appears to be doing the same.  Each person who comes to his party has some kind of issue that they are working through, and often religion is in the main heading of the story.

As the film sets up I noticed a lot of awkward conversations and odd glances.  I saw contradictions in many places.   Although we don’t yet know why these things are happening, it sets up the atmosphere.  It made me curious about almost every person – what was their story?

It reminds me that everyone has a tale, and I like that the film was set up to look at each person instead of just Henry.  Everyone around him is dealing with something from coming out, depression, adultery, death…  There are a lot of issues here, but it never feels melodramatic or manufactured.  The film has a very natural feel to it, sometimes like the conversations are being improvised in real time.

While the young people in the film are sorting out their lives, I also feel like the adults each represent some part of them that is in conflict.  Bob (Henry’s dad) is tradition and piety, Kat is empathy and open to change, Larry is the rebel bucking the norms, Bonnie the righteous judgmental one.  This isn’t to say the adults aren’t all one dimensional, but the juxtaposition of them as archetypes contrasts with the younger characters that embody multiple traits.

It can’t be ignored that religion has a central role in this film and each person’s journey.  I can’t help but notice how divisive it is in this instance.  For example, there is a character that appears to be struggling with depression – he seems to be completely ostracized.  One would think that those around him would rally around to make sure he was doing ok, but that wasn’t the case.  It is presented here in several ways as an obstacle to overcome, and that well-being is on the other side.

One takeaway here is that despite how one dimensional or focused someone may appear, there is almost always more below the surface.  Everyone is dealing with something no matter how big or small, and the many parts of ourselves assert themselves at different times.  Be kind.