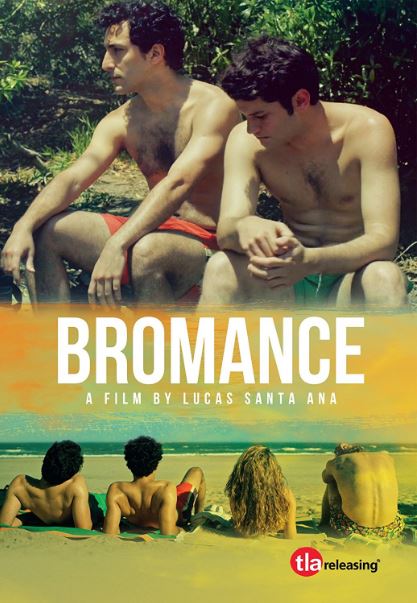 How well do these friends know themselves and each other, and will their friendships stand the test of learning each other’s secrets?

Quick synopsis from IMDB: “A forest by the sea. Three friends. A girl. Friendship, love. Can they overcome prejudices and go back to being friends again?”

To clarify, there are several films that have similar names.  This is not the 2015 comedy Bromance, nor is it the Thai film called My Bromance.  I also think the synopsis would better read, “A camping trip. Three friends. A girl.  Friendship and love.  Do they really know themselves and each other, and can they still be friends in the end?”  I’m not sure that the forest is the key part of their journey together.

The first night of camping reveals that there is something more between Daniel and Santi than just friendship.  Whether it’s one sided or not is part of the story of the film.  The two have an intimate conversation that evening, and it’s one that Daniel replays in his mind and literally on camera.

The camcorder is part of the story-telling here as Daniel uses it to record their vacation together.  Each of the guys

takes turns filming, and we see different perspectives and personalities through this device.   Interestingly, it seems that even the chosen font for the credits seem to imitate the camera/date font.  Even the music seems to have the same vibe – at first it was ok and enhanced the film.  Later it began to sound too much like Casio music.

As the trip continues, they meet Julieta who seems to be the catalyst that starts to change the dynamics between the friends.  Daniel’s feelings start to come to the surface, Santi must figure out what he wants both from himself and his trip with his friends, and Adrian must deal with his family issues while also working out his changing friends.

People change over time as we grow, and friendships can be one of two ways.  There are the friends that accompany us on short trips like the ones that we have at jobs or in school, but don’t follow us past those journeys.  Then there are friends who follow us the distance, learning and growing with us and accepting the change the comes with a lifetime.

These friends seem like they might be just out of college and starting out on their own – a time when many people really start to find themselves.  We hear Santi telling Adrian about how now he has to be responsible and pay bills.  But they’re also working with some outright and internalized homophobia at the same time they’re figuring out what their friendship will look like going forward.  It’s the push and pull of life where history pulls friends together, but the potential of growth as people may pull them apart. 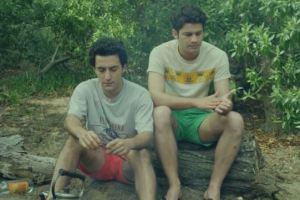 They explore the value of friendship through the film.  The Spanish translation of the original title is “Like a Girlfriend without Sex.”  They discuss the adage that friends are forever while girl/boyfriends may come and go.  But what happens when that line is blurred, and what can happen afterwards?

They are a lot of gay antics with each other whether it’s used to taunt or to harass.  For instance, they tease each other tickling each other a lot in the beginning, and Santi goes for Adrian’s crotch in a joking manner.  Several instances occur where they joke with each other to “show me the peanut.”  They also harass each other like bringing up Daniel’s story about the kid he used to play strip poker with.  Here we see how three people each deal with the realities of someone being gay, and each does so differently.

The story is well told with a good script, pacing, and good acting. Production values are very good except for the music at times (and the carvings that are on different tree bark than the tree they are on – but they didn’t deface the tree so good on them for that).  I want to do a lot more post-show analysis here that I’m not (so I don’t ruin the film for you), but the fact that I want to shows there is more here than your standard coming of age film.  The themes of the story are broad enough that many people can connect with this film whether it’s about coming out or how friends grow apart or together.

Availability: On Dekkoo, Amazon, and at TLAVideo