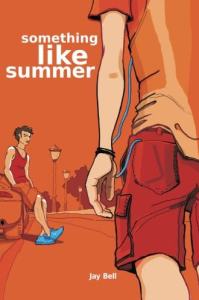 “Love isn’t meant to be hidden away, and life is too short for shame.” – Jay Bell, Something Like Summer

The story: Something Like Summer tells the story of the relationship of Ben Bentley and Tim Wyman over the course of a dozen years, starting when they get together in high school, go their separate ways, then try for a second chance, only to face the worst kind of failure.

This future film is based on a successful novel, and would be Blue Seraph’s third production.  This film has themes around love, coming out, growing up, and making hard choices.  I originally read the book in 2011, but when I saw that it might be made into a movie I reread it.  I started the book about 24 hours ago, and had it not been for a shift at work I would have finished it in one sitting.

I get pretty into books sometimes, but this one was hard to put down.  The story draws you in and makes you feel as if you were one of the characters.  Everything is well developed but not overdone.  The characters are down-to-earth, not fake, and the author (Jay Bell) really makes you understand why they do and feel what they do.

I’ve followed JT Tepnapa and Carlos Pedraza since I saw/heard about them in relation to a fan-based Star Trek production.  The movie Judas Kiss is one of their films that tackled issues like the choices we make in life and what would happen if we could make them again.  It was well produced and won awards and recognition from websites like AfterElton.

I would expect this next feature to follow in those footsteps.  JT and Carlos seem connected to the material, and I trust that in their care the novel will translate to the screen.  I think they would make Something Like Summer a film that other people can see themselves in and find meaning.

If you are interested in seeing more and better gay themed films this is one that I would recommend participating in their crowd funding.

If you can’t wait until 2016 to get the story you can find the book on Amazon, and is a great way to support an independent author.