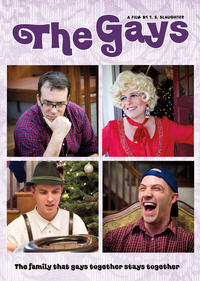 Warped, absurd, and horrifying. What happens in this movie is astonishing, and will make you wonder where child protective services is in this extreme world of hyper-gayness that would make Queer Eye guys vomit.

From the website: Wouldn’t it be great if your parents taught you how to hold your own in a fag-eat-fag world? Rod Gay and Bob Gay-Paris are the streetwise gay mentors you never had. Come revel in the raunchy wisdom they pass along to their two gay sons — Alex and Tommy — advice that will empower the boys to bend the world over, lube it up, and snap one off!

I have to be honest, I was turned off from the first scene. I think I wrote “horrified” in my notes. We start out with a baby that is surrounded by every phallic object ever made, and it’s mother telling him he’s “…going to be the best cum-guzzler…” (This is going to skew my search engine results…) Where do you go from here?

This film is raunchy beyond what many teenage kids could dream up, and offensive on many levels. Being transparent here – this is not my kind of movie. It does not appeal to me. The saving grace here is the character Kevin who indicates that there is a different perspective, and that the movie is making us ill intentionally.

If you look at this movie in the context of the world we live in you might see something. Decades ago, gay and lesbian people were denied custody of their own kids for fears of what would happen to the children. And you have to be in a drug-induced coma to have not noticed a small debate going on about gay marriage and what havoc it could cause to society. The Gays are an extreme. They portray the gay family in what must be the most twisted mind that thinks gays are unnatural. It’s easy to see how this family might rip apart the fabric of society.

The organized gay community has portrayed gay life as pretty mundane. We go to work, pay taxes, go to the grocery store, etc. This is all in the name of conformity so that acceptance will be won. This film takes an extreme tactic in showcasing the nastiest stereotype and then exponentially making them worse. How could anyone think that this is what it means to be gay, right? The problem for me is that it lacks a certain wit to tie it together and communicate these things in a way that doesn’t make me want to barf.

If you look at this critically, the film seems to comment on how ridiculous certain gay stereotypes are as it takes them to levels of absurdity that you may need an emesis bag to watch. It also references movies like A Christmas Story and The Exorcist as it makes its point with creative reimaginations.

The movie is about an hour long, and if you can make it through without crapping your pants then I will applaud you. Its social commentary is buried within a junior high school level of raunch, but if it doesn’t turn you off immediately then you’re in for something unlike anything else. Or you can, as Bob says, “just stay home and knit a sweater.”