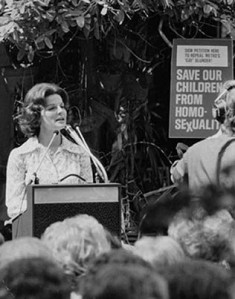 It’s more than a simple letter – it’s a letter from the heart to all of the queer community.  We see the history, the struggle, and the woman who has touched so many lives through her compassion and activism.

From the movie’s website: A heart-wrenching story of Anita Bryant’s anti-gay campaign, its shattering effect on one Florida family, and the redemptive power of forgiveness.

The film opens with a map of marriage equality, and that struck me right away on several levels.  That map has changed drastically in just the past few weeks.  It’s amazing how the movie talks about the extreme lack of protection for LGBT people (and in some cases persecution), and the contrast to the progress made in the past decade.  It’s a reminder that both much progress has been made as well as that we should know the history of how that progress was accomplished.

Dr Ronni Sanlo lost her children in her divorce in the late 1970s when there were laws in Florida that dictated that LGBT people could not have custody of children – even their own children.  I find that both amazing and disturbing at the same time.  The film chronicles Dr Sanlo’s time after that, but it’s important to note that this woman made a huge sacrifice – she lost her children in order to be out and true to herself.  It wasn’t a conscious choice to lose her kids, but a consequence of her admitting to being a lesbian.  What is almost as horrifying is that her kids were then brought up to hate and fear her because of a family’s homophobia.

I found the history that was discussed to be fascinating.  Of course the film looks at how Anita Bryant affected and influenced both public opinion and laws about LGBT citizens.  It goes into the Bush-Trask bill along with the many flea collars that were sent to Bush (not the recent Bush).  I never knew anything about the “Purple Pamphlet” that was apparently a hot commodity at one time.

The most amazing part of the film is Ronni Sanlo herself.  She opens up and talks about a lot of things that were extremely difficult to live through.  What is also impressive is her sense of understanding and forgiveness.  It’s a lesson that we can all learn and benefit from.

Availability:
In film festivals now
The letter itself is available on Amazon.com here.